Sunil Jayawardene was a representative for three-wheele drivers. He who went to make a representation to a finance company on behalf of one of the vehicle owners, whose three-wheeler had been taken by agents of that company. Sunil was assaulted by eight or more people in front of the company and murdered. This story is quite well known and being talked about in the country at the moment. 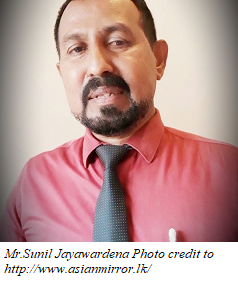 The whole amount related to the dispute in this incident is about Rs 35,000. Due to the situation of the coronavirus and resulting curfews, many three-wheeler owners have not been able to have an income and therefore they have been unable to pay their monthly installments. As the government was aware of this problem, it publicly instructed banks and others to give a grace period for a few months for persons who are unable to pay their monthly installments.

Despite this, Sunil Jayawardene was murdered because he tried to intervene on this issue.

What is important from a moral and political point of view is the fact that a person can be murdered in open daylight in a dispute involving just Rs 35,000. Obviously the killers were not personally motivated to carry out this murder; they were merely carrying out what they were instructed to do by whoever instigated this murder. Therefore, we will not concentrate on the legal issues of guilt. Our concern is regarding a man being killed over a dispute that involves this relatively small sum of money. This does not mean that if the amount was larger the crime would be in any way justified; it obviously goes against all moral norms to kill a person for any sum of money. However, when a person is killed over a relatively smaller sum, it goes beyond the general moral prohibition against murder, but also reveals the kind of changes in mentalities that have taken place in the country. Therefore, this murder involves not only a moral issue, but also a sociological issue regarding transformations that are taking place in Sri Lankan society.

No culture or society can be judged by a few instances of any serious crime. A culture is something much deeper and therefore the issue is not to make a judgment about culture on the basis of this case or the many similar cases taking place in the country at the moment.

The issue is really that in a culture that is old and that has established its cultural norms over a very long period, such murders for trivial issues remain unchallenged. Studies into Sri Lanka’s pre-history has established very clearly that the country has over 100,000 years of history. The local indigenous population was established over a long period. When people live together over a long period, there is an establishment of common understanding and agreement on certain normative frameworks guiding behavior even though these may not be written down. During this long period, indigenous people lived in peace. Later on, there were good influences from religion, such as Buddhism, which also would have increased the moral strength of a people.

However, recent history shows that there is some grave disturbance taking place at a very deep level in society that makes some persons and groups ignore these well-established moral norms to achieve very petty and trivial ends. It is this overall disturbance of the society as a whole that needs to be understood if terrible consequences that may come about due to such a disturbance are to be avoided. Disturbing the inner balance of a society has always proved to be dangerous. Societies can keep their vitality only to the extent that the inner balance holding the society together can remain intact.

This is no different to the situation of an individual human being. All individual human beings are born with the capacities that have been developed over a long period of their evolution. The mental and psychological balance that people hold is not merely their personal achievement but the achievement of an evolutionary process. However, for one reason or another, when this balance is disturbed within an individual, that becomes the source of all kinds of mental and other illnesses that go beyond the control of that individual or even that society at large.

Particularly in the 20th Century, psychology developed as a very vital branch of science and it has demonstrated the ways in which the balance within individuals can be disturbed and the consequences that this can lead to.

What Sunil Jayawardene’s case and similar cases demonstrate is that similar disturbances are being expressed within Sri Lankan society. Such disturbances often happen long before persons who are affected become aware of them. Thus, Sunil Perera’s case is not the expression of the beginning of a disturbance of this nature but an expression of much deeper problems that lie within the very depths of the Sri Lankan society.

Ultimately, what such disturbances show is the value that we attach to human life. Where societies hold their balance, the value of life becomes rich and societal relationships are also more mature and humane. When the balance is disturbed, the value of life itself becomes less. When the societal perception of life is devalued, anything can happen. Whether it is murder, rape or any other form of crime, including the sacrifice of the young by the introduction of illicit drugs on a large scale, it is all possible within a disturbed society.

However much external instructions are given through the schools and other institutions, it will not have the desired effect so long as the overall society is in a highly disturbed state. When the overall value of life goes down, that manifests in everyone who lives in that society, and those manifestations teach generations – not for the better, but for the worse.

Sunil Jayawardene’s murder, like many other murders taking place now, have deep social implications. These should be carefully grasped and addressed if far worse consequences are not to follow in a society that has entered into a state of very great disturbance.

It may be recalled that Carl Jung’s predictions on the world wars was based on observations on the patients he met in his clinic. On matters of the heart and mind, the particular and the general are tightly bound.