Angunakolapelessa Magistrate Darshima Premaratne yesterday (11) ordered the immediate release of two inmates who were assaulted by officers at the Angunakolapelessa Prison. She has also ordered a team of senior police officers to conduct an impartial investigation into the incident.

Dulantha Rajapaksa is currently in the Intensive Care Unit of the Karapitiya Hospital due to internal bleeding due to the brutal assault at the prison.

The two prison officials were outraged when they asked for money to provide alcohol and have scolded asking “We are officers who work in prison. Are you asking us for money?”. It is said that they had assaulted the employee and left with the keys of a motorbike which was there at that time.

Later, the assaulted employee informed Amila Kumarasinghe about this. When he and another group were coming to Angunakolapelessa town, they met the two prison officers who were drunk and had a confrontation with them.

The next day, the two prison officers were admitted to the hospital complaining to the police that Amila and Dulantha had assaulted them.

Accordingly, the police have arrested Amila and Dulantha on five charges and produced them before court. That was last Friday (9). The court has ordered that they be remanded until the 22nd.

Defendant’s Counsel Upali Mohotti and Attorney-at-Law Pradeep Deep Rajapaksa have requested the Magistrate to provide security to the two prison guards as they have been charged with causing a confrontation with the prison guards.

After considering the lawyers’ request, the Magistrate ordered the Angunakolapelessa Prison Superintendent to provide security to the two suspects. The Magistrate had also ordered that the suspects be detained at the Matara Prison for their safety.

Despite the order, the detainees were taken directly to the Angunakolapelessa Prison that day. The two detainees, who remained there until night, were assaulted during the night. They say that was when the power supply was interrupted in that area.

As a result of the assault, Dulantha was transferred to Karapitiya as his condition was critical after he was hospitalized with injuries. Amila has not been hospitalized.

Meanwhile, the lawyers’ team of the detainees have summoned the case again through a motion yesterday (11) and presented all the information before the court. They also demanded that the Angunakolapelessa prison be removed from the investigation. Accordingly, the judge ordered the suspects to be released on bail and ordered an impartial inquiry into the matter.

Attorney-at-Law Pradeep Rajapaksa, who appeared for the suspects, said that the prison authorities had violated the order issued by the Magistrate to provide security to Amila Kumarasinghe and Dulantha Rajapaksa who were assaulted yesterday and that legal action would be taken against them in the future.

Earlier too, a video of a group of inmates being chased and beaten at this prison had been released during the ‘Yahapalana’ government. Although committees were appointed at the time to investigate into the matter, it has not yet been revealed what happened to the report. 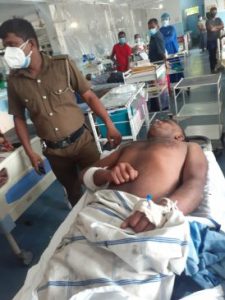