About 10 officials led by a Chief Inspector of Peliyagoda police station brutally attacked a law student right inside the police station when the student visited a suspect held by police.

The incident took place on February 26 and the Minister of Public Security Sarath Weerasekara ordered the relevant police officers interdicted and the incident investigated.

Victim Migara Gunarathna was admitted to the hospital.

President-elect of Bar Association of Sri Lanka (BASL) Saliya Pieris appeared with other lawyers for the victim when the facts regarding the case were reported before the court. The case was taken up on March 01 and Colombo Additional Magistrate Bandara Nelumdeniya ordered the Inspector General of Police to transfer the investigation from Peliyagoda police to another unit. The progress of the investigation must be reported to the court on April 15. Pieris tweeted, “The news of a young final year law student Migara Gunaratne being subject to police brutality at Peliyagoda is appalling. There should be zero tolerance of police brutality. The perpetrators must be swiftly dealth with and prosecuted.” 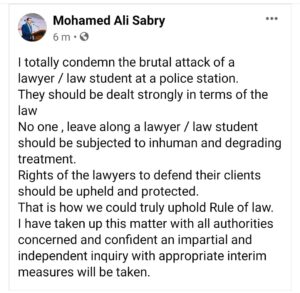 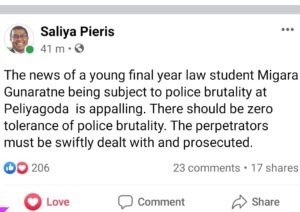