On 27 January 2022 the government of Sri Lanka gazetted the Prevention of Terrorism (Temporary Provisions) (Amendment) Bill. We the undersigned express our deep disappointment that the proposed amendments do not address any of the shortcomings in the Prevention of Terrorism Act (PTA) that enable grave human rights violations. We highlight that the PTA has been historically used against the Tamils, later Muslims after the Easter Sunday attacks and now dissenters as well.

We restate our call for repeal of the PTA and in the interim an immediate moratorium on the use of the law. This is in line with the requests of persons and communities adversely affected by the law. We call upon the government to release all persons on bail, except those that would not qualify under the Bail Act, and halt prosecutions where the confession is the primary or only evidence.

The proposed amendments do not adhere to human rights standards enshrined in international conventions, such as the International Covenant on Civil and Political Rights (ICCPR), which the government of Sri Lanka has ratified and hence has an obligation to respect and protect. Nor do they adhere to many provisions in the Constitution of Sri Lanka. We set out the main shortcomings of the amendments below:

This violates basic due process and fair trial rights of a person accused of an offence, because the onus is placed on the accused to prove the confession was obtained under duress. It also calls into question the competence of the criminal justice system that has to rely on confessions to prosecute persons. Such a provision, which is a deviation from the norm, has no place in law.

The proposed amendments fail to address the fundamental shortcomings of the PTA. Instead, they propose changes that already exist but are often observed in the breach, or cosmetic changes that do not substantively or meaningfully change the status quo. The actions of the government, such as the issuance of the regulations on the Deradicalisation From Holding Violent Extremist Religious Ideology, call into question the government’s reform claims.

We note with deep concern that despite our repeated calls for transparency in the drafting process and consultation with key stakeholders, our appeal was ignored.

We reiterate that national security cannot be achieved by creating insecurity for already discriminated against and marginalized communities, and once again call for the repeal of the PTA. The repeal of the PTA must also be considered in light of the anti-terrorism and public security legal framework that Sri Lanka has in place, and the historical abuse of power by state entities.

The way forward must give due recognition to the protection of physical liberty. Deprivation of physical liberty by the executive must be used only as last resort and strictly require sufficient basis that is determined on objective factors, judicial supervision of such basis, legal aid and prompt trials or release. Furthermore, any process which seeks to tackle issues related to the PTA must ensure those adversely affected by the law will receive justice, and include an enforceable right to compensation for arbitrary detention. The prohibition of arbitrary deprivation of liberty has acquired customary international law status and constitutes a jus cogens norm which Sri Lanka is duty bound to secure for its citizens.

The balance the government wishes to achieve between personal liberties and national security can only be achieved through addressing the root causes of conflict and violence. Attempts to further curtail civil liberties in the guise of national security will only exacerbate the insecurity of all communities and undermine the rule of law and democracy in Sri Lanka. 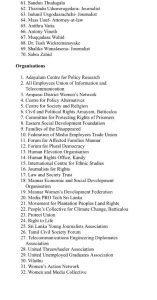