The Executive Committee of the Bar Association of Sri Lanka (BASL) has issued a statement that commenting on the recent media release titled “circulation of fake news, photographs, videos causing disunity, hate and obstructing the Covid-19 programme” by the Sri Lanka Police.

“Whilst the BASL has no objection to enforcing laws relating to hate speech and incitement to violence, it is important to ensure that authorities do not use such laws to stifle genuine expressions of dissent and criticism” the BASL said.

They further stated that, “The BASL is deeply concerned that the provisions of the laws mentioned in the circular, could be misused by police officers in order to stifle the freedom of speech and expression which is a fundamental right enshrined in the Constitution. At the time where the country remains under travel restrictions as a result of the Covid-19 pandemic it is essential that the freedom of speech and expression of the people and their right to dissent and disagree are protected”.

The statement contained some passages quoted from several judgements including the most recent case of U. N. S. P. Kurukulasuriya, Convenor, Free Media Movement, and J. K. W. Jayasekara, V Sri Lanka Rupavahini Corporation SCFR 556/2008 and 557/2008 decided on 17.02.2021, to emphasize the importance of freedom to openly share critical views or freely comment on important matters as members / stakeholders of society.

“Furthermore, it would be consistent with due respect for democratic values ​​and freedoms, for any decision to arrest without warrant to be resorted to keeping in mind the spirit of preserving fundamental freedoms and the need to avoid suppressing or oppressing the right to free expression of views.  In our view this would be better achieved, if any decision to arrest or charge any person is taken only after careful due consideration and professional assessment that there is a real and reasonable prospect of an alleged offense in law being committed, with advice from the Attorney General as may be warranted in the relevant context” the statement said.

They also stated, “The BASL will continue to monitor any violations of the Fundamental Rights and the Rule of Law in respect thereof and will make further legal interventions where necessary”.

These concerns of the BASL have been brought to the attention of the Inspector General of Police by letter dated 10/06/2021.

Following is the full statement; 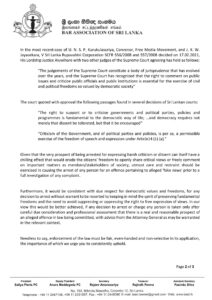 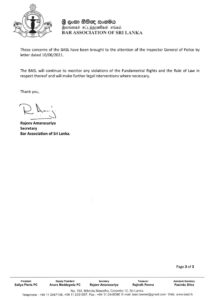